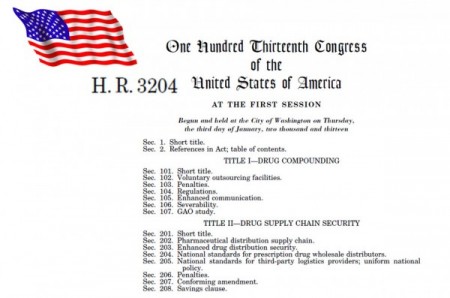 On the eve of Thanksgiving 2013, a decade’s old struggle to better secure the US drug supply chain was quietly signed into law.  The 113th Congress of the United States passed the Drug Quality and Security Act (DQSA) (House Bill 3204 which is now Public Law No: 113-54).

The DQSA is comprised of two acts. Act I addresses the regulation of compounding drugs. Act II, referred to as the Drug Supply Chain Security Act (DSCSA), enables the tracing of prescription drug products through the pharmaceutical supply distribution chain.

Simply because the term “drug supply chain security” does not appear in the Act I title and is comfortably relegated to the title of Act II, do not be misled.  More than 77% of the 22,000 words are dedicated to this legislation and it has far greater reach and impact than the regulation of compounding drugs.

The DSCSA regulation provides greater oversight of the FDA, essentially enhancing the detection of illegitimate products in the supply chain and enabling the US traceability of each prescription drug down to the individual package level.

What are the primary objectives of the DSCSA?

Federal efforts to secure the supply chain began in 1987, however legal challenges forced a delay in implementation, encouraging some states to establish their own legislation.  In 2004, the State of California passed the most comprehensive anti-counterfeiting and anti-diversion legislation in the United States for prescription medications.

The Pharmaceutical Industry sought additional time to comply as the challenges and complexities of Item Level Serialization were better understood.  As a result, California’s implementation dates were delayed several times.  Staggered implementation of compliance was established in 2011.

For most of 2013, pharmaceutical manufacturers and packaging providers were actively establishing strategies and solutions for both Item Level Serialization and ePedigree in order to comply with a looming California-based mandate of 50% product portfolio compliance by January 1, 2015.

As those dates approached, the Pharmaceutical Industry was able to convince both Republicans and Democrats, that a single National approach, instead of 50 different state solutions, was in the best of all concerned.

Without much fanfare, the Federal government, in a rare display of bi-partisanship, established a national approach to drug supply chain security.  The Drug Supply Chain Security Act was introduced by the House in September, passed the Senate in November, and signed into law by President Obama on November 27, 2013.

How does the new Federal legislation differ from the California ePedigree law?  Will the legislation reduce the likelihood of unsafe, ineffective and suspect drugs from entering the supply chain and reaching consumers? How will it impact the drug supply chain?  What are the requirements that manufacturers, distributors, and dispensers must comply with? By when?

How to Comply with DSCSA?

In subsequent posts, we will address the challenges of compliance.